We all know that Valentines Day will be here soon. Why not add some fun and creative crochet to help celebrate the day! There are so many unique items that you can incorporate into that special day.

I ran across these cute Lips to make as an application or what ever your heart desires. Click here for the pattern {walker whimsy}: Crochet Kissy Lips {14 Days of Fluffy Stuff}.

Another way to add some fun to your wardrobe is to make this scarf! This could be made in pastel colors as shown or make it more vibrant with some red and white or even a touch of black added to it.  You will find the pattern here Conversation Hearts Scarf – Media – Crochet Me.

Have you ever wondered when Valentines Day was first associated with Romantic Love? Well I did so here is some information for you to take with you thanks to Wikipedia.

The day was first associated with romantic love in the circle of Geoffrey Chaucer in the High Middle Ages, when the tradition ofcourtly love flourished. In 18th-century England, it evolved into an occasion in which lovers expressed their love for each other by presenting flowers, offering confectionery, and sending greeting cards (known as “valentines“). In Europe, Saint Valentine’s Keys are given to lovers “as a romantic symbol and an invitation to unlock the giver’s heart”, as well as to children, in order to ward off Saint Valentine’s Malady.[6] Valentine’s Day symbols that are used today include the heart-shaped outline, doves, and the figure of the winged Cupid. Since the 19th century, handwritten valentines have given way to mass-produced greeting cards.[7]

All right back to some of those unique crochet items that you can create for Valentines Day!  We go from the neck down to the feet. 🙂 I saw these and wanted to make me a pair of these slippers.

Here is one for the kids or those of us who remember doing this game on paper! I don’t know about you but I remember playing this game with my Brother, Sister and Cousins all the time.  Those are some fond memories! 🙂

Why not add some Romance with some home decor. A wreath of roses for your door or window!

I have made some of these crochet Heart Coasters and love the way they turned out! As you can see they make any table have a touch of Romance.

If you have had any fun things that you have made for Valentines Day let me know. I would love to see some of them! Thank you for stopping by and hope you had fun looking at the different things you can create in crochet to make your Valentines Day Romantic and Fun!!

I love the feel and look of a scarf! They can make a fashion statement or be there for the warmth against the cold.  The scarf can be made from a variety fabrics and fibers. They also can be worn different ways to accomplish that certain kind of look or for necessity.

Here is one that you do not need to sew, knit or crochet! Looks Great and the Free Pattern is below.

Have you ever wondered where the scarf originated from? Here is a little history of the scarf. (Information from Wikipedia)

Ancient Rome is one of the first origins of the scarf, where the garment was used to keep clean rather than warm. It was called the sudarium, which translates from Latin to English as “sweat cloth”, and was used to wipe the sweat from the neck and face in hot weather. They were originally worn by men around their neck or tied to their belt. Soon women started using the scarves, which were made of cloth and not made of wool, pashmina, or silk, and ever since the scarf has been fashionable among women.

In later times scarves were also worn by soldiers of all ranks in Croatia around the 17th century. The only difference in the soldiers’ scarves that designated a difference in rank was that the officers had silk scarves whilst the other ranks were issued with cotton scarves. The men’s scarves were sometimes referred to as “cravats” (from the French cravate, meaning “Croat”), and were the precursor of the necktie.[citation needed]

It is never too late to learn something new! I had no idea that the precursor for the Necktie was a Scarf.  Below are some variations on scarves that can be crocheted. Have fun with them and make your own Fashion Statement!

Another version of a scarf and looks like it is knitted. Pattern is below picture.

Arm Knitting has become such a big trend. I have not tried it yet. That is on my to do list, which by the way is way too long!! 🙂 Below you will find a link for Arm Knitting from the Crochet Crowd!

This braided scarf is beautiful and unique. I love the fact that this is made from strands of the foundation stitch. This pattern is available from Raverly to purchase.

Thanks as always for stopping by! I do have scarves available in my Shop for your gift giving pleasures or for your own personal use!

Wow this year has just flown by. I can’t believe that Christmas is almost here! The last few months I have been busy getting our house ready to sell! Now that I am done painting, cleaning and all that goes with getting ready to sell a home I can finally get to what I love most. You guessed it Crochet!!

Okay I have got to be honest I did find some time while I was watching TV to get some crocheting done. Here is what I have finished.

I am not real sure I am happy with the way this one turned out. I am thinking that I will have to do some more experimenting with this type of yarn. Which is Bernat Boa! 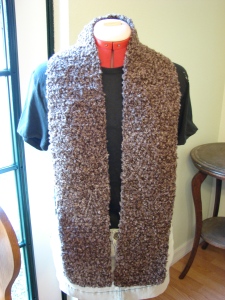 I love this yarn which is Bernat Soft Boucle. The way it works up is so nice and soft. This yarn also works up real fast. This scarf will definitely keep you warm on a cold winters day!

Are you all ready for Christmas? Do you have all the decorations and the tree put up, the gifts all bought and wrapped?

Here is a cute Santa Hat to make for the little ones! Click on the image to get the pattern.

Santa Hat and Beard for Kids

Easy Does It Blanket

A Cozy Christmas Afghan to make for those you love!  I love to cuddle up with a blanket on those cold winter nights.

Thanks as always for stopping by my crochet and crafting corner of the world! Have a Blessed and Wonderful Christmas Season 🙂